National Fire Safety Week, 5th – 12th October, organised by the Northern Ireland Fire and Rescue Service, is about promoting fire safety, especially within the home. This year’s theme is “Smoke Alarms Save Lives”. The campaign will focus on Fire Safety in the home as the public continues to spend an increased amount of time at home due to recommended guidelines during the public health situation. 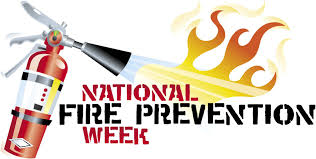 “The thought of a fire is terrifying yet many of us feel that it can’t happen to us. Fire doesn’t choose. It can happen to any of us at any time. STOP and spread the word this Fire Safety Week. STOP Fire and remember, smoke alarms save lives.”

Both the very young and the elderly are particularly vulnerable and these groups account for almost half of the domestic fatalities.

Dublin Fire Brigade Chief Fire Officer Dennis Keeley joined the Minister at the launch. He reminded the public of the STOP Fire steps which every household is encouraged to practice.

“STOP has only four letters – four simple steps to keep you and those you care about safe.”

While National Fire Safety Week marks the beginning of an intensive media advertising campaign to run until the Spring, Minister O’Brien emphasised the importance of keeping the public aware of the dangers of fire be maintained throughout the year.

The Minister paid tribute to the contribution made by the Fire Service during the current COVID crisis. He states that:

“We can count ourselves incredibly lucky that communities throughout Ireland have at their disposal such a fine group of brave frontline public servants not just this week but every week. The dedication, commitment and willingness to serve and contribute during this crisis is clear for all to see. They have stepped up when needed and the calm professional reassurance they always provide us is perhaps more valuable than ever during this difficult time.”

This week is very important in the calendar of fire services around the world. National Fire Safety Week has its roots in the Great Chicago Fire, which occurred on October 8, 1871. The former American President, Calvin Coolidge proclaimed the first National Fire Prevention Week in 1925 in memory of those who perished in that Fire. Since then, in early October, it has been observed each year in countries around the world.

The key messages which are to be communicated are:

More information can be accessed on:

Alcohol Awareness Week is an annual event held by the...

World Pneumonia Day was established in 2006 by the World...

Multiple sclerosis is an autoimmune disease that affects...

International Day of Persons with Disabilities

This day was established by the UN General Assembly in...

World Kindness Day was created by the United Nations in...

We use cookies on our website to give you the most relevant experience by remembering your preferences and repeat visits. By clicking “Accept”, you consent to the use of ALL the cookies.
Cookie settings ACCEPT
Manage consent

Other uncategorized cookies are those that are being analyzed and have not been classified into a category as yet.

Advertisement cookies are used to provide visitors with relevant ads and marketing campaigns. These cookies track visitors across websites and collect information to provide customized ads.

Analytical cookies are used to understand how visitors interact with the website. These cookies help provide information on metrics the number of visitors, bounce rate, traffic source, etc.

Performance cookies are used to understand and analyze the key performance indexes of the website which helps in delivering a better user experience for the visitors.

Save & Accept
Powered by